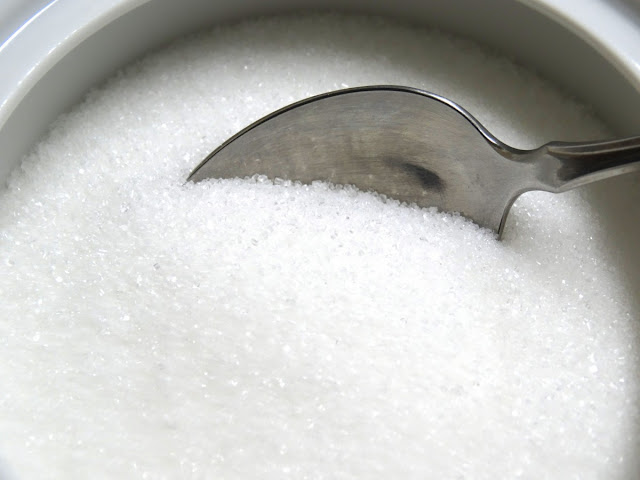 Erythritol: benefits and risks as a sweetener

Erythritol is one of the key ingredients commonly used in zero calorie sweeteners. If you are suffering from diabetes mellitus and/or if you are following low carb diet for weight loss, then the foods listed as “sugar-free” or “no sugar added” may look like a good option. These foods are usually sweetened using sugar alcohol such as erythritol. It tastes like sugar but contains about zero calories.
Sugar alcohols have many advantages. There are almost no calories. There is no probability to increase in blood glucose after its consumption. It does not cause any tooth decay.
But, they also have some disadvantages. It can cause some side effects such as diarrhea, headache and stomach pain in some people and/or when consumed in large doses. Please read on to better understand all the risks and benefits.

Erythritol is a sugar alternative that looks and tastes like sugar, yet there are almost no calories. It is available in both granular and powder forms. It is 60-70% sweet as compared to regular table sugar. But it has only 0.2 kilocalories of  caloric value per gram which is 95% less than sugar.

A sugar alcohol, Erythritol has been approved for use in the United States and in many other countries as food additives. The sugar alcohols you have heard about include Xylitol, Maltitol, Sorbitol etc.

Can Erythritol harm or disturb Digestion ?

In small amounts, erythritol is not considered as the cause of any digestive problems and diarrhea that other sugar alcohols are known to cause such as Sorbitol and Xylitol. This is because Erythritol is a very small molecule and 90 percent of it is absorbed in the small intestine. And most of the part is emitted unchanged in the urine.
There are some people who, after consuming regular amounts of erythritol in food or beverages, report side effects such as diarrhea, stomach upset, and headache. The amount due to symptoms varies different depending on your personal tolerance. Some people think that even a small quantity of sugar alcohols is disturbing to their stomach, while others can tolerate high amounts before experiencing any gastrointestinal symptoms

Consumption of more than 50 gram of it can cause nausea or stomach upset.

Whether consuming Erythritol may Spike Blood Sugar or Insulin?

Erythritol has been described as a sweetener of zero glycemic indexes, and it has not been found to affect blood sugar or insulin levels. For these reasons, this particular sugar alcohol is popular with people on a low carb diet.
In a Japanese study, they found that “erythritol did not increase the serum levels of glucose or insulin.” They also found that Erythritol has not led to any significant effect on serum levels of total cholesterol, triacylglycerol or free fatty acids.

Concerns about erythritol and other low-calorie sweeteners

When we eat, our brain registers that we have eaten and prompts our body to release the hormone which reduces your appetite. In the case of sugar alcohol, it is mostly passed through our body undigested. As a result, we do not experience similar kind saturated signs as we do with traditional sweet food. This means that we feel still hungry and we can be select more foods to eat. Thus it defeats the purpose of eating sweet foods with sugar alcohol for low-calorie purposes.

Erythritol is not the cause of tooth decay

One important advantage of erythritol is that it does not cause tooth decay. It was shown in a 1992 study titled “Noncariogenicity of erythritol as a substrate.”

In our mouth, harmful bacteria can use sugar for energy, which helps them grow and multiply and spoil our teeth. But Erythritol is different, it cannot be metabolized by oral bacteria, and it does not cause the cavities.

What Happens to Erythritol Inside Our Bodies ?

According to a 2005 paper titled “Human gut microbiota does not ferment erythritol“, most of the consumption of erythritol is absorbed rapidly in the small intestine. And after traveling through the bloodstream, 90 percent of it emits in the urine. Only 10 percent of this sugar alcohol enters the colon.

Some people have experienced a laxative effect after consuming other sugar alcohol, such as Xylitol and Maltitol. But, since most Erythritol is absorbed in the body prior to going to the colon. As a result, it usually does not cause any laxative effect.

In conclusion, there are many advantages over sugar in erythritol. There are almost no calories in it, it does not decay teeth and does not increase blood glucose.

Unless it is consumed more than 50 grams, Erythritol does not disturb the digestion in most people.

I recommend that people still need to be cautious that they do not end up heavily with Erythritol-rich food items. The reason behind this is: According to the American Diabetes Association, most of the foods that use sugar alcohol in the form of artificial sweetener still contain a significant amount of carbohydrate, fat, and calories. If you are choosing sweet foods with sugar alcohol for reasons of weight loss, then you cannot benefit yourself.

Though it naturally occurs in some fruits and fermented foods, commercially it is produced from cornstarch. In common practice, it is made using GMO cornstarch.

When selecting foods with sugar alternatives, examine the label of food facts, and compare nutritious information to traditionally sweet foods, to determine which one is the best option for you. If it is produced from GMO cornstarch, I recommend you to avoid it and go for Non-GMO one

Apple Cider Vinegar: Is it as good as it’s being advertised?

Ashwagandha Is Essential For Your Health. Read This To Find Out Why

Tyrosine - Information, Benefits, Uses, Side Effects and Reviews:What is tyrosine?Tyrosine is a salt used for the treatment of...